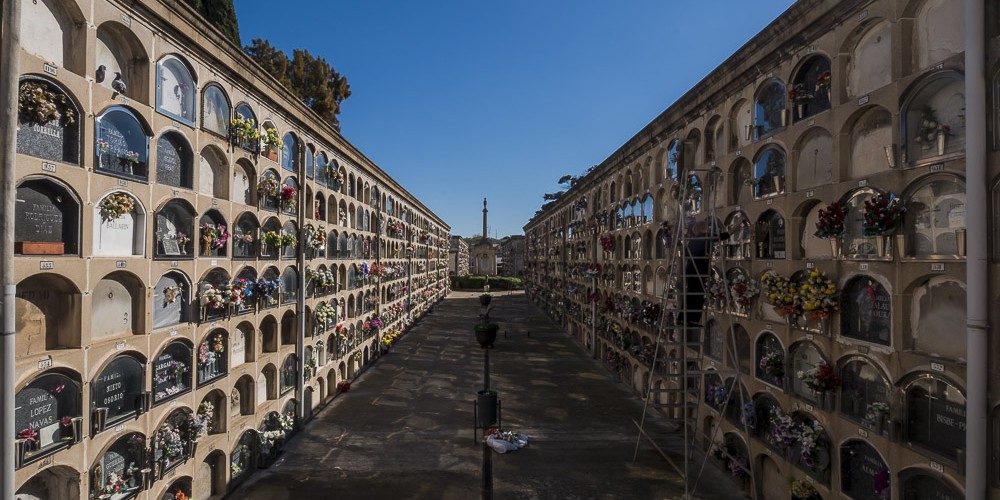 And at this time 2006, when the management of the cemeteries is divided, I had been offered to manage these sites of the city. It is also in this year when, the whole team of Cementiris of Barcelona, with me at the front, we started to give recognition to the cemeteries of the city as goods of patrimonial and cultural value.  We understood that for many years, these cemeteries or compounds had been hiding, closed to the city, to which the citizens of Barcelona agreed once a year for the festivity of Tots Sants (Day of the Dead) on November 1st. Or on the day on which they were going to dismiss them to give them the last farewell. We thought that these enclosures deserved a different treatment, a special one, since they are authentic open air museums with a great cultural potential and that they should be at the service of the city of the living.

In the year 2007 we began a project to make the cemeteries open to public  as well for tourism. At that time we were very careful and very cautious when using the tourism terminology because we were aware that what we were doing was novel, had never be done in these latitudes and therefore, the use of the word tourism to display the cemeteries could offend or disturb a part of the population. For several years we have used the terminology “cultural”: cultural visits, cultural routes, cultural events; because it was a more universal terminology and perhaps less offensive. But experience has shown us that, after 8 years, we can speak openly of tourism without any fear, because, in reality, that is what we are doing and since we use this term openly, we have never had any complaints.

The cultural vision of death

The culture of death is an indigenous culture, particular in each region and area, and even in the same geographical area, more or less small, can be diversity of visions. In Barcelona, for example, the way of understanding the death is not the same as 200 km or 150 km away. Those who are working in this sector and we do quite some time, we are very aware of this because we have experienced it in first person.

For example here in Barcelona, families remember their deceased, visiting and cleaning the elements of their own niche, the tomb or burial. They pray if catholic  an “Our Father” (the catholic religion is the main religion). Normally it is the whole family or most of them, this can last between 20 minutes or as much as an hour and a half.

In Catalonia, and this is quite typical of the whole Mediterranean arch: the spanish Levante, France, Italy and few countries more, there are vertical constructions, what we call niches, which  are usually between 4 to 7 stores high buildings, as needed by the cemeteries. These tend to be funeral concessions with a duration of 50 years, enabled to obtain a renew of the lease if family members so desire.

This is the oldest, the Cemetery of Poble Nou, dating from 1817, therefore know how many dead there are buried is a lot more difficult.

Organization and economy of the death

In the area of Barcelona, the people those die with no economic resources have the right to be buried without any cost. This  is what we call the burials of charity, and in this case the company of cemeteries puts at the disposal of these deceased some niches for 5 years. The burial, and this is important to stress this – has exactly  the same characteristics as any other economic burial.

We must bear in mind, that in Spain, unlike what happens in other countries of the European Union there exist a product offered by insurance companies. This product arose and was unveiled in 1939, after the Spanish Civil War. The payment of this insurance gives as a result the exemption of any expenses arising out of death, since the insurance company runs with all the funeral expenses. Currently 60% of the population has contracted this insurance of death.